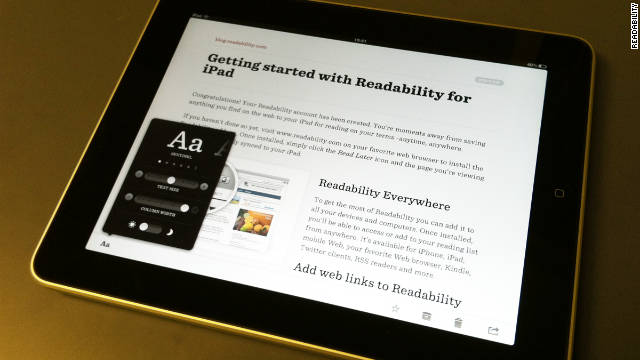 After conceding its disagreement with Apple, Readability will offer free apps for the iPhone and iPad

(CNN) — Few people seem eager to return to the news articles they didn’t have time to read during the day, and even fewer are willing to pay for that privilege.

So to attract new users, Readability began offering its news-inbox service for free starting Tuesday evening. Previously, people had to pay $5 per month to access the tools for saving articles to their accounts and synchronizing them between computers, e-readers, phones and tablets.

Readability is in one of several services, which also includes Instapaper and the venture-capital-backed Read It Later, for bookmarking a lengthy article to revisit when in a more leisurely setting. Some people prefer reading on a Kindle or iPad, rather than on a computer or smartphone, and these services typically allow people to customize fonts, strip out ads and other distractions, and read on a device without an Internet connection on, say, a subway ride.

In addition to the free Readability service, the New York software developer will also offer an application that runs on the iPhone and iPad. The app should be available in Apple’s App Store, also for free, as early as this week, and people will be able to subscribe through the app, Readability co-founder Richard Ziade said in a phone interview.

Readability was spun out of consulting firm Arc90. It first launched its subscription Web service in February, and after a disagreement with Apple over financial terms, the company said in March that it would eschew the App Store in favor of tools that could be accessed exclusively through a Web browser.

Beyond the inbox service, Readability also offers website publishers a button so that users can choose to read on the site without distractions from ads. About 4.4 million articles are accessed through Readability’s system a month, Ziade said.

However, Readability’s paid service, which is designed to give most of the revenue to the publishers whose links are being read, has only managed to attract between 2,000 and 10,000 subscribers, he said.

“It’s been quite clubbish,” Ziade said. “We tell you to get your credit card out after, like, the second click, which is unheard of on the Web.”

The free version of Readability will limit users’ inboxes to 30 articles each, and they won’t be able to access links saved in their archive folders until they pay the $5 monthly fee. Sending an inbox full of articles to a Kindle will also require a subscription.

A rival, Read It Later, sells its mobile apps for $3. Another called Instapaper, which says it has about a million subscribers, took an alternate route when the one-man startup announced in April that it would stop offering a free version. Founder Marco Arment said then that the free app brought more users but that they were unhappy with the limits imposed on it. As a result, they were publicly tarnishing the app’s reputation with negative reviews.

Arment, who has advised Readability in the past, declined to comment for this article. In an interview with CNN in May, he said, “I think a lot of people are getting a little bit tired of what comes along with being free.”

A greater concern for these small software companies is the lion in the room. Starting in the latest Mac operating system called Lion, Apple added a feature called Reading List to its Safari browser allowing users to temporarily save links. The newest iPad and iPhone software then allows users to freely access those same articles and by clicking a button called Reader, removes the ads. Apple’s Reader tool happens to be based on the work at Arc90 that eventually became Readability.

Arment has said, in his optimistic view, that the recent developments at Apple could introduce more people to the concept of article inboxes, and when they want more powerful features, maybe they’ll buy Instapaper. However, Ziade sees Apple’s moves as competition, but he said Apple leaves an opening for other apps to flourish because the Safari tools won’t work on every platform.

Readability is soldiering on, and the company will begin allowing developers to build apps that integrate deeply with its service. It is holding a New York event on Thursday to announce a major partnership with Longform.org.

“There’s a real surge of interest in long-form, generally, on the Web,” said Matthew Howard, a director for the New York Review of Books. “It’s kind of exciting to have these tools coming out that are bringing new readers to this kind of stuff.”