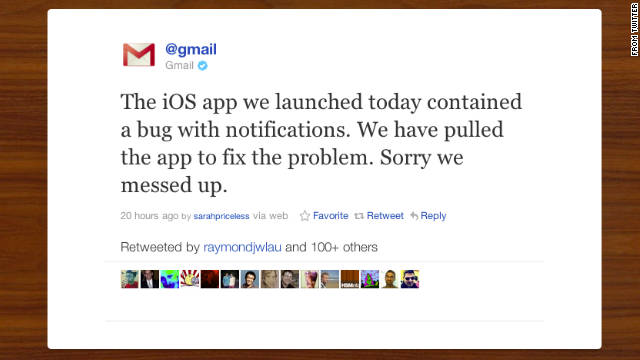 It didn’t work. So the company had to yank the app.

And now it’s back again.

On Wednesday the Mountain View, California, company said it had “fixed the bug and notifications are now working, and the app is back in the App Store.”

Google offered no new apology for the screw-up, and said the app would continue to improve:

“We’re just getting started with the Gmail app for iOS and will be iterating rapidly to bring you more features, including all the ones listed above plus many more,” Matthew Izatt, a product manager, wrote on Google’s Gmail blog. “Based on your comments we have already improved our handling of image HTML messages – they are now sized to fit to the screen and you can pinch to zoom in. ”

“In the short time the app was public we received a lot of helpful feedback and feature requests.”

On November 2, the company offered an apology to users, who complained the app didn’t work.

“The iOS app we launched today contained a bug with notifications,” the company wrote on Twitter. “We have pulled the app to fix the problem. Sorry we messed up.”

The whole ordeal led at least one tech writer to lose his faith in the company’s innovative potential.

“They release something, and I no longer have any faith that it’s going to be any good,” MG Siegler wrote on his personal Tumblr blog. “It’s hard to get excited about a company like that. It’s the same reason why it’s hard to get excited when Microsoft and Yahoo release new things. The track record just isn’t there any more. The faith is gone.”

At least some initial feedback about the re-released app was positive.

“I really like it, the UI is great – don’t know what all these people are complaining about,” one person wrote on the app’s page in iTunes Preview.

Overall, the app had a three-of-five-star rating on that page.